You are here: Home / Willard History 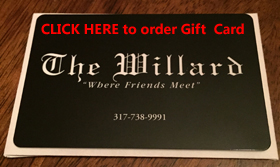 The Original brick house, which is the core of the present structure known as “The Willard”, was built in 1860 by William and Cynthia King McCaslin. Mrs. McCaslin was the daughter of George King, who had received the original 160 acres in a land grant on October 17, 1822. Mrs McCaslin died in 1878 and William married Marguerite Mullen.

After William’s death in 1883, Margeurite and her niece, Marguerite McCullough, resided in the home until 1922 when it was sold to Eliza Patterson Willard and her niece and nephew, Mr. & Mrs. Will Judah. Mrs. Willard and the Judah’s paid $11,000 for the original building and spent a great deal more constructing the hotel around the brick house and remodeling the interior. From that time on it was known as The Willard Hotel. Ironically, both Mrs. Willard and Mrs. Judah were active on the Prohibition Movement.

After sitting idle for several years, The Willard was purchased and refurbished by John Limp and John Wright of Franklin, as a pub and eatery, specializing in pizza, hot wings and the friendly environment so many people enjoy today. The main theme in the restoration of The Willard was restoring the building without detracting from the antique fixtures and the historical charm. The curved staircase in the foyer and the marble fireplace mantle in the main dining area are part of the original McCaslin home.

In 1990, The Willard was sold to the former owner, Bob Schofield and his partner, the late Don Henry. Bob and his wife Alexa have maintained the historic landmark establishment until 2014.  In 2015, Bob and Alexa sold The Willard to their son, Tony Priola and his wife Emily, who are committed to persevering the great food, good drinks and the place “where friends meet.”

The Willard Bar and Restaurant

Today, we are proud to say that The Willard is regarded by residents as one of the best restaurants in Franklin. To this day, we are still the home of some of the mouth-watering pizzas, chicken wings, and sandwiches in all of Johnson County. We also offer a wide selection of alcoholic beverages, with over 75 different beers and spirits to choose from.

The Willard is a smoke-free, family-friendly establishment with a gorgeous view of the Johnson County Courthouse. When you need a place to unwind with family and friends, The Willard is the place to be.

Experience the richness of our history for yourself. Drop by The Willard for a fantastic dining experience like no other! For any questions you may have, please do not hesitate to call us at . We accept reservations for large groups and special parties.